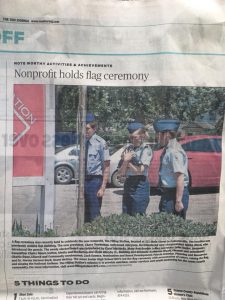 This picture posted in the blog today represents so many emotions for me. In 2013, our church created a task force to start exploring the possibilities of new mission. We had been given some money to start something NEW. Our hearts began to stir with ideas, dreams and visions of what was next. We had several brainstorming sessions and lots of prayer as we worked on putting a plan together. There was an empty building beside our church grounds which became a available. So, we began to step out in faith that we were being called to serve our community by feeding and educating people.

Now we needed a name for the mission. The empty building was an old gas company. As we walk through the building, we noticed a placard that had the numbers 1075 on it. Our minister made the comment there is only one book in the Bible with that many chapters so let’s look it up. Psalm 107:5 which says, “They were hungry and thirsty, and their lives were slipping away.” At that moment, we were reminded that we were on the right track and named the mission “The Filling Station” where people would be filled up.

We began working on a plan to present to the congregation. There were many home meetings, church dinners and parking lot conversations about how to move forward. In fact, the first time the plan was presented to the church board, it was rejected. The task force continued to work and pray in faith that we were being called to serve the community. As a small church family, we knew that this mission would need to become a separate organization to gain the community support.

Over the past few years, I have experienced “Unity in Diversity”. We reached out to all the churches in our community, other non-profit agencies and presented our plan to the county commissioners. The outpouring of people and resources has been amazing. This past week we held a Flag Ceremony on the grounds of the “Filling Station” and introduced the new board to the community. A great work has begun and will continue to prosper.

The National Day of Prayer Task Force chose the theme this year as UNITY and based it on the Ephesians scripture. There is no man or woman powerful enough to orchestrate what the Spirit can deliver to human hearts.